What is Solitude and Are You Really Alone?

Everybody feels lonely from time to time. When we have no one to sit next to at lunch, when we move to a new city or when nobody has time for us at the weekend. But over the few last decades, this occasional feeling has become more chronic for millions of people. In the UK %60 of 18 to 30 year old people say they often feel lonely. In the US %45 of the population feel lonely regularly. We are living more connected with each other than any time in human history. But an unprecedented number of us feel isolated.

Being lonely and being alone is not the same thing. You can feel good by yourself and can feel hate for every second surrounded by friends. Loneliness is purely subjective, individual experience. If you feel lonely, you are lonely. A common stereotype is that loneliness only happens to people who don’t know how to talk or how to behave around other individuals. But however studies have shown us that social skills make no difference for adults when it comes to social connections. Loneliness  can effect anybody; money, fame, beauty nothing can protect you against loneliness because it is a part of us, our biology actually. 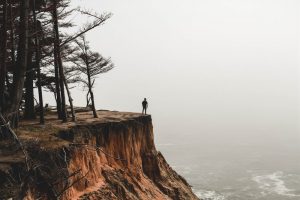 1)SO WHAT IS LONELINESS ACTUALLY?

Loneliness is a function of our body, like hunger. Hunger makes you to pay attention to your needs. Loneliness makes you pay attention to your social needs. Your body cares about your social needs, because millions of years ago it was a great indicator of how are you going to survive. Natural selection gave our ancestors for collaboration, and for forming connections with each other. Our brain grew and become more and more connected to recognize what others thought or felt and form and keep social bonds healthy. Being social became part of us. You were born into groups which you usually stayed with for the rest of your life. Getting needed food, staying safe or caring for your baby was impossible alone, being together meant survival and being alone meant death. It was crucial that you got along with other individuals.

Your ancestor’s most dangerous threat to survive was not being eaten by wildlife, but not getting the social attention of your group and getting isolated. To avoid that, your biology came up with “social pain”. Pain of this kind is a revolutionary adaptation to rejection, a sort of early warning system to make sure you stop the behavior which isolates you from the group. Ancestors of us who experienced rejection as more painful were more likely to change their behavior when they got rejected by others. And so that they could stay in the tribe while the individuals which accepted rejection died. That is why rejection hurts. These mechanisms for keeping us connected worked great for most of the human history until humans began building a newer world to ourselves.

2)THE CONS OF THE MODERN WORLD.

We can say that the loneliness which we see today really started in the Renaissance. Western culture began to focus on the individual. Intellectuals moved away from collectivisim of the Middle Age while Protestants interiorize individual responsibility. This trend gain speed in the Industrial Revolution. People left their homes most likely from villages- to work in the factories. Little groups started to dissolve and the cities started to grew. As our world rapidly became modern this trend accelerated more.

Today we move long and long distances for jobs, education, love and also even for leaving our social environment behind. We meet fewer people in person and less than in the past actually. Researches show that in the US mean number of close friends decreased from 3 to 2 in 2011. Most individuals gets chronic loneliness by accident. You reach adulthood and get busy with work, university, romance, kids and Netflix. There is just not enough time for us. In our age the most convenient and easy thing to sacrifice is time for our friends. Until you wake up one day and realise you are isolated and feel you want closer relationships but its harder to find close connections as adult than you were young, yep that is the time your loneliness became chronic loneliness. While humans feel pretty good about things like spaceships, our bodies and minds are fundamentally the same they were 50,000 years ago. We are still biologically fine to be with each other.

3)HOW LONELINESS KILLS US?

Studies shown us that yhe stress which comes from chronic loneliness is among the most unhealthy things we can experience. It makes you age quicker, it makes cancer deadlier -like other diseases- and immune system weaker. It is surprisingly twice as deadly as obesity and as deadly as a pack of cigarettes a day. But I can say that the most dangerous thing about it is it can become self-sustaining.

Physical and social pain use common mechanisms in our brain. Both feel like threat and so, social pain leads to defensive behaviour when it is inflicted to you. When it becomes chronic, your brain goes into self-preservation mode. It starts to see danger everywhere but it is not all. Some studies proved that when you’re feeling lonely, your brains is more capable of alerting you to social signals however you listen people more but understand them fully less. The part of your brain that recognises faces gets ruined and becomes more likely to categorize faces as hostile which makes others more distrustful.

Loneliness makes you waiting for the worst about connections towards you. Because of this hostile world, you become more and more self centered which can directs you to be seen as more unfriendly and socially awkward than you really are.

If you feel loneliness has become strong in your life the first thing you can do is to try
recognising the terrible cycle you have trapped in. It is usually feels yourself isolated and be sad about it so
you focus your attention on negative interactions more and this makes your thoughts about yourself and other more negative which than changes your behaviour. You begin to avoid social interaction, which leads to more isolation. This cycle becomes harder to escape every time. Loneliness makes you to sit far away from others in class, not answering when a friend call, declining invitations until sadly the invitations stop.

Every one of us has a story and if your story becomes people excluding you, other pick up on that and so the world can become the way you feel about it. This is often a slow process that takes years and can end in depression and a mental state that prevents connections even if you want them. The first thing you can do is to accept loneliness is totally normal and nothing to be ashamed of, literally everybody feels lonely at some point in their life, its a human experience. You can’t eliminate or ignore a feeling until it goes away immediately but you can accept that you feel it and get rid of its cause.

You can self examine what you focus your attention on, and check if you are concentrating on negative things. Was this interaction with your friend is really negative? What was the actual content of an interaction, what did the other person say? And did you say something bad or did you add extra meaning to the words of them. Maybe the person was not really negative but just short on time. Then there are your thought about world. Are you assuming the worst about others? Do you enter a social situation and have already decided how will its going to be? Do you assume others doesn’t want you around? Are your trying to avoid risks? And if so, can you try to give others the benefit of the doubt? Can you just assume they are not against you or can you risk being open again.

Lastly, your behaviour. Are you avoiding opportunities to be around other or looking for excuses to decline invitations. Are you really looking for new connections or have you become okay with your situation. Of course every person is unique and different, if you feel unable to solve your situation by yourself, please seek help from the professionals. It is not a sign of weakness but of courage. However we look at loneliness as a purely individual problem that need solving to create happiness or as a crisis actually, but it surely is something that deserves more attention. Humans built a new world but yet none of the things we invented or build is able to satisfy our fundamental biological need for connection. Wild animals get their needs from their surroundings but we get what we need from each other and we are obliged to build our world based on that.