Charlie and The Chocolate Factory is a 1964 children’s novel by British author Roald Dahl. The movie with the same title was released in 2005 is directed by Tim Burton and features some of the most popular actors of our century like Jhonny Depp, Freddie Highmore. This story is about a boy who is not the strongest, not the smartest, and definitely not the richest but the luckiest.

After closing his factory for good Willy Wonka decides to let 5 lucky children into his factory. He decides to release five golden tickets in chocolate bars, each child experiences the most amazing factory ever. But not everything goes to plan within the factory. This movie is for everyone from the age of seven to seventy. One of the best parts of this movie is it teaches great lessons about resistance. 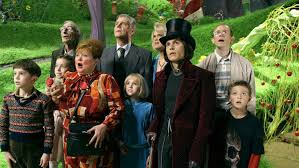 The movie helped me about focusing on the bigger picture. The kids were in the best place they could ever be but couldn’t resist their pleasures and lost the chance of their lives just like in real life.

I, as a person who has watched this movie over 10 times, would highly recommend Charlie and The Chocolate Factory to family s with kids of every age and also to people who want to escape from the stress of life and spend two great hours.