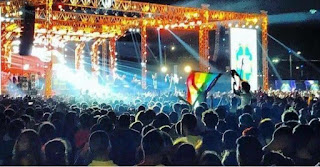 Egypt; we all know this country for its magical pyramids. Or maybe you know it for the coup that took place in 2013, probably you know both. One thing you may not be aware of is the anti-LGBTQ+ crackdown that started in 2017. In 72 countries in the world, it is illegal to be a part of the LGBTQ+ community. Egypt is one of those countries. There isn’t a law that specifies that LGBTQ+ people aren’t allowed to exist but they are often arrested and prosecuted under “debauchery” laws. Debauchery basically describes behavior that involves sex, drugs, alcohol… or anything that is considered immoral. So these people get abused by police because police and the general public find homosexuality or trans people shameful and sinful. In 2017 there was a rock concert in Cairo. The singer in the band iS gay and some people in the audience waved the rainbow flag during a performance. Afterward, these people were praised on social media and went viral. However, the government wasn’t as happy. Media controlled by the state painted the concert attendees as perverts and disgusting people. A huge crackdown of the LGBTQ+ community started with over 100 arrests. Police tracked down people through social media and dating apps. So people from the concert and all over Egypt were arrested. I want to tell you the story of two victims of police brutality. 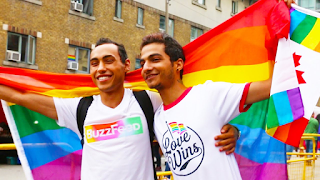 ı firstly want to mention Ahmed Alaa. This young Egyptian (21 at the time of the arrest) is one of the people who raised the flag at the concert. He posted photos of him raising the flag on social media and a few days later he was arrested. His life in Egypt was ruined, his family also facing backlash. Alaa was charged with “inciting fornication and immorality” and “promoting debauchery”. “I was verbally harassed and humiliated by the officers.” Says Ahmed, he also adds that the officers pinned him down and shaved his head. After the officers told the other inmates that he was gay he started to receive death and rape threats. After three months in jail, he was released but he lived in consistent fear of dying on the street. He got his visa for Canada and left Egypt. He says that the case remains open and that he can not return to Egypt. He says that he wasn’t afraid to raise the flag at all. “It was an amazing feeling raising the rainbow flag in Egypt and saying, we are here, we are not afraid, we are the power!” He said. You can watch two videos about his story through the blue words. 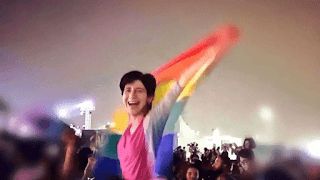 Sarah Hegazys has a story filled with tragedies. Sarah waved a rainbow flag in the same concert as well. She was later arrested. She spoke up about her experiences with the authorities. She had been tortured by the police who used electric shocks and solitary confinement. The police threatened to hurt her mother, who passed away after her departure. The police verbally abused her and incited other detainees to beat and sexually harass her. She was also able to escape to Canada. Young Ahmed Alaa says that he met Sarah during the prosecution. He says, “She took care of me as if ı was her son.”. Sarah wrote about her struggles after her traumatic experience in jail. She said that she was in constant fear of everyone and that she was haunted by the streets. She wrote that she left her country in fear of her life. She wrote, “I had severe depression, PTSD, anxiety, tension, and panic attacks”. She also wrote about her attempted suicides, stuttering, memory problems, and all of her mental struggles. She finalized her statement by saying; “I have not forgotten my enemies. I have not forgotten the injustice that left black spots etched in the spirit and bleeding spots that doctors could never treat.” She ended her life in June 2020, in Canada.

I am a writer. It is my job to express my feelings through words on paper but it is just not possible to put my feelings into words right now. Sarah Hegazys’s story is one that shall be remembered. To Sarah; I hope you are at ease and rest. To everyone else; We need to do better and protect the lives of everyone in this precious world. I know this statement might seem overused and unnecessary but just putting this idea in my reader’s heads is very important to me. It will not be easy but we can not give in. You can start by educating yourself and others around you. Providing safe spaces for people around you and staying safe yourself. There will be a day where we have prides with rainbow flags covering the blue sky in countries like Egypt. Having hope is our best motivator to keep seeking better ways to help the people in need.