One day, I got into my car to leave the house and go to my workplace. I was about to start the car when a lever came from behind and put a cotton ball to my nose with his hand. I understood what was happening, but it was too late now. By the way, I’m a cop, so whoever did it, it was done by a blind man.

When I opened my eyes, I was in a warehouse. I turned my head to the right and saw my unconscious wife and daughter. They had also been kidnapped. A voice came from the left and I turned there. When I got back there, a man was coming towards us with a gun in his hand. He approached me and said, “If you tell me the outcome of the case in tomorrow’s speech, we will kill you first and then your wife.” he threatened. I couldn’t say anything because I had tape in my mouth, but even though there was no tape, I didn’t know what to say.

Of course, you don’t know what the case is now, I’ll explain right away. They shot a man recently, but they didn’t know who shot him. We somehow found the man and had him arrested. Everybody heard about it because the shot guy was famous, and things got a little messy. That’s why they asked us to make a statement and we held a press conference. In this conversation, we were going to explain who did it. If only these guys hadn’t appeared.

The man came in and ripped the tape off my mouth. After a short conversation between us, “Okay.” I said.

The next day came and that hour came. We had a plan with all the cops. We were going to catch the threats and save my daughter and wife. All the audience would be police and there would be no live broadcast. It would just look like it was. Someone had already gone to pick up my wife and daughter. I was going to talk about something on stage. 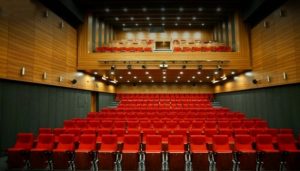 I took the podium to give my speech, accompanid by applause. I was just about to start talking when I saw him in the cowd. And I thought to myself, “I hope nothing goes wrong.” I spent it. When I started to talk things, events developed and our plan all worked in order.

Now my wife, daughter and I were safe. We caught the guys who did this, and we held our actual press conference about it. Everyone was happy and peaceful, and they went on with their lives.