Most things in life exist with their respective antonyms. The light wouldn’t shine through if there wasn’t darkness to start with, kindness wouldn’t exist if evil wasn’t something to fight against. The universe lets your chances bounce between these antonyms hoping to catch you offhanded with its next move, or the other, or the one after that. You may have formed a certain mindset to use against the universe  and its despicable ways. The two simplest ones are law of attraction and Murphy’s law. The two are of course antonyms and that doesn’t come as a surprise. Now, the question is whether to follow pessimistic ways of Edward A. Murphy or to share your hopes with the universe itself in  desperate hopes that it may will them to come true.

Murphy was an American aerospace engineer back in the 40’s. Because his job needed extreme safety precautions, Murphy always followed the law of his own name which basically advised to expect the unexpected and if something has the tendency to end in catastrophy, it will.  Though saying that chaos is more probable than everything going 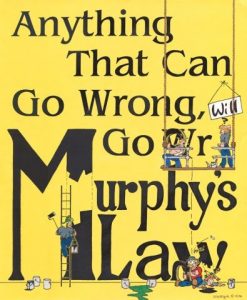 smoothly may seem pessimistic at first glance , it actually just wants to eliminate overlooked details. But this is where things start to get tricky. If you waste your today thinking of a possible plan B, then the thinking that went into the plan A won’t be as productive. And you don’t even know if you’ll need a secondary plan! The law of attraction,- originally found by Prentice Mulford- on the other hand, makes you believe that you

can manifest your way out of your daily struggles which may lead you to be confident in your way of thinking and living in harmony with the universe.  But for how long? I can guarantee that you’ll be feeling your best from the start of your ‘’believing’’ journey all the way to the end just until the universe decides to pull its cards and you end up in utter dissapointment. Maybe you’ll end up more dissapointed than Murphy’s law could ever intend you to be. What is better, to be miserable from the start and possibly eliminate worst-case scenarios or to let the universe blind you preventing you from opening your eyes before its too late?

When night-time comes around, my thinking pattern gets more complicated and that specific pattern causes me to plan my next day regarding the worst possibilities- quite like what Murphy does- but with the sun, I feel like I’m some omniponent creature which can get through the hardest days with ease. Hence, I don’t think there’s only one way to think and having a singular way of thinking would limit your already limited choices even more. When it’s the right time, I let Murphy determine my next move just like how I let Mulford’s law of attraction give me hope. Because I need both circumspection and hope from time to time, I’m sure you do too.