Today, the world has lots of problems to face, and I am talking about lethal problems. Their lethality levels are high enough to maybe end the human race. One of the biggest ones is global warming. Global warming does not only affects humans but it affects the whole environment. That’s why it is so lethal. When the living creatures in nature starts dying, the food chain will shift, and this won’t be good shifting. We, humans, are on the top of the food chain, so we need supplies from litteraly every being. That’s why it won’t be good. 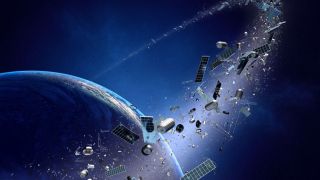 So why don’t we just leave this sick planet and settle down at some nearby planets or maybe the moon? We may create little bases and live in there and maybe terraform that place. We have enough technology to start, so why not? The thing is that global warming does not come with itself, it comes with lots more problems. But, in my opinion, the most threatening one is the space debris issue. Space debris is just all the objects thrown into space without care. Satellite parts, disposable astronaut gadgets etc. The thing about space debris is that they start a chain reaction. Even one millimetre-sized solid particle can pierce through a huge satellite. This happens because space is just being an empty place. There is nothing to apply friction to objects so they reach enormous speeds. That’s how a millimetre-sized solid particle can pierce through a satellite. This does not end with that. The particles collide with each other and create more and more small particles. They also collide more and fill the space with countless numbers of particles. These particles are set in Earth’s orbit and won’t leave. This makes the world an inescapable place to suffer. The global warming and space junk rates are so high that we can not even escape from our homes today when we don’t start trying to solve them. Otherwise, we will all suffer in that very rock in space. So what we should do the clean up our home from that problems?

In my opinion, we should fix global warming first. Global warming happens because of greenhouse gases like CO2 (carbon dioxide) or CCl2F2 (chlorofluorocarbon). These gases trap and spread the incoming sunlight coming to the world, so some percentage of it does not reflect. This heats up our home and eventually, the world won’t be a suitable place to live in. So we need to get rid of excess amounts of that gases. Some organisms like plants already use that gases to do photosynthesis. So all we need to do is decrease carbon emissions on Earth.  Literally, all luxury stuff creates lots of carbon. So we need to restrict our luxury product usage. Some examples of that luxury stuff are; travelling by your own car, consuming meat, using plastic bags, etc. This does not end with restricting luxury. As humans, literally all we do releases carbon, so we need to decrease everything or find a way to do them without releasing carbon, like electric cars. After dealing with global warming, we need to deal with other problems like space debris. But space debris is not the only problem we need to deal with, there are lots of problems. If we don’t start today and procrastinate, we will just suffer and eventually disappear…