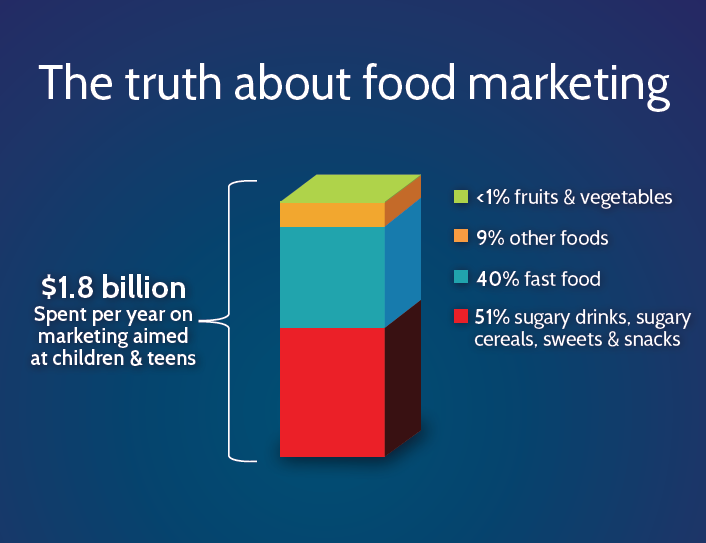 Marketing has long-term effects on children because eating habits and preferences during childhood tend to continue later on in their lives and the risk of overweight children turning into overweight adults is estimated to be at least double that of ‘’normal’’ weight children. Research has shown that unhealthy food ads, including TV and online advertisements, packaging of products and collectible toys have a great impact on children. This research explains that the production industry is taking advantage of the developmental vulnerabilities of children and teenagers. For example, when watching TV, children under the age of 5 age are not able to see the difference between a cartoon/show and an advertisement. Moreover, children  under the age of 10, are more likely to not think about the future outcomes of their actions. They tend believe everything they see or hear on television ,therefore,we must  instruct kids on how to have healthy eating choices. When junk foods are readily available and easy to access, it is pretty understandable for them to choose foods that are bad for them rather than the beneficial ones because they don’t know any better, which means it is our duty to keep them informed on what is and what isn’t good for them. 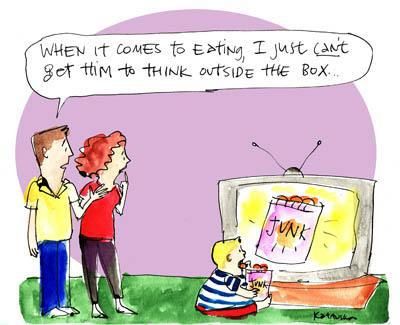 Commercials are being associated with the increase in the rate of obesity in children, and researchers believe that this correlation is related to the promotion of unhealthy foods. Promoting these products increases the intake of various foods, including junk foods and soft drinks. Researchers also estimated that the average 5 to 8 year-olds who watch about 80 minutes of television each day is exposed to 827 commercials that promote unhealthy products. The study showed that the correlation between television exposure and poor diet was greatest for children who watched the most commercials on television and were exposed to ads during broadcasts. In addition, The United Nations Convention states that children have the right to a healthy childhood without being affected from economic exploitation. Therefore, some measures should be taken to protect teenagers and children from exposure to unsanitary food ads and increase their odds of maintaining a long, stable and healthy life.

Regulations should directly address the types of foods and beverages regulated, where they are sold (e.g. internet, media, television, schools, etc.) and the targeted audience. Evidence suggests that partial interventions are inefficient and easy for businesses to maneuver around. In addition, self-regulations that industries set do not work and precise rules with real consequences are needed to limit children’s exposure to the promotion of unhealthy foods and beverages. Policymakers must consider introducing strict and standard definitions to assess which goods are harmful and ,therefore, should not be marketed to children. To conclude, protecting children from unhealthy food and beverage advertisements by setting strong regulations is a must for reversing the trend of childhood obesity and for maintaining a healthy generation.