Being helpless and hopeless on a cold winter day, at the top of a mountain, without knowing what to do and how to move might sound scary. Actually that was the condition I was in, on the second day of the holiday. It was one of the most challenging moments in my life, which I absolutely will not forget forever.

Everything started with a call of my cousin letting me know that we were going to go on a winter holiday. Feeling excited, I jumped for joy since I had never been to a such kind of holiday. After a few days, we were all ready to go, with our backpacks and heavy coats. The journey was a disparate comedy: 7 people in a car! I was nearly flattened when I got out of the car. After checking into the hotel and resting, THE BIG DAY has come. We were going to try skiing for the first time, without knowing nothing related with it. We put on our skiing gears and ski sets, finally ready for the adventure.

Although the weather was freezing cold, we were so single-minded that we walked to the top of the mountain with those heavy sets. First, one of my cousins mustered up the courage to ski down the mountain by himself. After that, my uncle and other cousin dared to do the same thing. Thereupon, another member of the family also left us and let himself dive into the brightness of the snow. We were three cousins, remained there, with no idea. None of us has tried it before, none of us had any courage left after seeing that steep, snowy mountain. To our disappointment, there was no one to come and help us. After a fifteen-minute doubt, we finally decided to do it. While skiing through the cotton-white snow and feeling as if I was lying on the clouds, I suddenly heard a scream of my cousin. Subsequently another scream came from my other cousin, which made me understand that they fell down. I looked at them and right after, I also fell down and slid on my back for several metres. We, all together, burst out into laughter. First I attempted to stand up, but the ski equipment was attached to my feet so I could not even move my leg. Then I tried to take it off with my hands, however, it was impossible. My cousins were also in the same condition. Unfortunately, we were a few metres apart, therefore we could not help each other. There was only me and myself coping with the situation. After a couple of tragicomic minutes, to our great relief; a stranger, who seemed experienced, came closer and tried to explain me some techniques about how to stand up. Afterwards, again another tragicomic situation occurred, I suddenly got a cramp in my leg. It was too difficult for me to succeed but I could not have stayed there anymore. Two or three attempts after, I stood up. Not only me, but also my cousins managed to  do so. 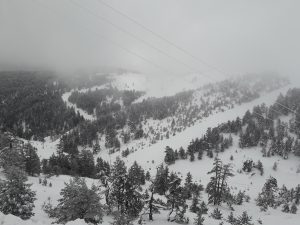 After going through these difficulties, we saw a similar face coming towards us: It was my uncle! We were rightfully angry and crossed with him. But he said that he tried to come and help us but could not manage to go up the hill. Whatever, we then found a less steep hill to ski and continue our adventure there. It was hilarious!