The actors and actresses are so convenient that you will forget you are watching a fictional movie. One of the actresses is Jennifer Lowrance who is playing the brave and strong woman Katniss Everdeen.  Another great and persuasive actor is Josh Hutcherson who is playing Peeta Mellark. 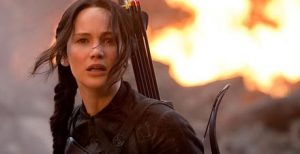 The Hunger Games is an impressive science fiction action movie. Its trilogy takes place in an unspecified future time in the dystopian universe. It is set in Panem, a North American country consisting of the wealthy Capital and thirteen different districts in varying states of poverty.

Every year for each district two people are selected from the twelve districts. The ones that are chosen were being transmitted to the capital with a lux train which they will be on it for a few days. After day come to the capital they make a ceremony to welcome and meet them. In the ceremony part, they used so impressive dresses that you will never forget.

The film shows the economical difference between the rich and the ones that are living in bad conditions and can be chosen for the hunger games. While the rich are puking to be able to try out more food, the poor districts are about to die because of poverty.

When they go to the hunger games they will fight until everyone, except one person, is dead. The one alive will be the winner. The Hunger Games is about the Katniss Everdeen’s hunger games.

The Hunger Games is the movie that everyone who is interested in science fiction/action movies should watch. It is set in the future time in the dystopian nation. Under the flavour of the book, the ones who prefer to read the book then watch the movie can also feel the atmosphere of the hunger games.