Is it too late to prevent climate change? Do we still have a chance to save our home in spite of the fact that we have already caused major changes?

Because of the fact that it takes a while for the planet to respond, we did not experience that much of the effects of climate change and global warming, past years. There is a time lag between what we do and when we feel it. That is why we did not take this issue seriously. But at the present time, Earth started to give reactions. Our planet is screaming for help, while nearly most of us do not care about it.

According to the latest estimates, global temperature is on track to rise by an average of 6 °C. Research shows 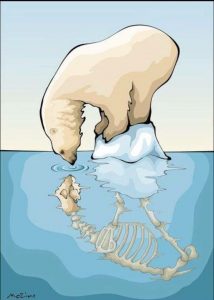 that a possible global disaster has started to occur at the poles of the planet. However, it might not be as bad as we thought if we take an action. First of all, we have to reduce the flow of greenhouse gases into the atmosphere such as Carbon dioxide. Recycling and driving more fuel-efficient cars are examples of important behavioural change that will help. But they will not be enough, due to the fact that this is a global problem. Since some countries did not consensus with the countries that are trying to prevent or slow down  climate change with some contracts like ‘’ Paris Climate Agreement.’’ We have to work together if we want to see the same blue sky in the future.

In the final analysis, our World is on the edge of a disaster which could bring very serious consequences. We have to take an action as a team. And also, we have to be more careful about our personal responsibilities. The climate is changing, why aren’t we?